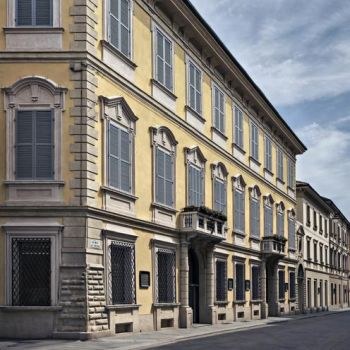 Palazzo Spalletti Trivelli is located in Via Emilia San Pietro, on the corner of Via San Nicolò.

This elegant palace was built in the late 15th century on a site where a tavern called Osteria del Cavalletto is known to have stood since 1415. In 1685, the palace belonged to Count Paolo Bossi, who then sold the property to the brothers Fabrizio and Orazio Guicciardi, two silk entrepreneurs who needed to boost the family’s prestige in order to obtain a noble title. The façade, divided into three levels, was designed by the architect Giovanni Maria Ferraroni (1662-1755) and was built in the mid-18th century. A series of major works to adapt the palace to the Neoclassical style started in 1830, the year when the building was acquired by Count Gianbattista Spalletti Trivelli. The renovation works were carried out by the engineer Pietro Marchelli (1806-1874) and the painter Prospero Minghetti (1786-1853), both of whom taught at the School of Fine Arts of Reggio Emilia.
Palazzo Spalletti Trivelli became public property in the late 17th century, and after 1940 became the headquarters of Credem bank. The Palace houses important collections of masterpieces of Emilian art from the 16th to the 18th century, as well as oriental and contemporary art, alongside archaeological finds exhibited in the basement where we can see the archaeological remains of the forum of the ancient Roman city of Regium Lepidi. 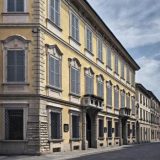 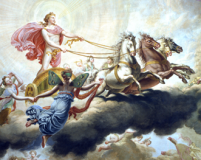